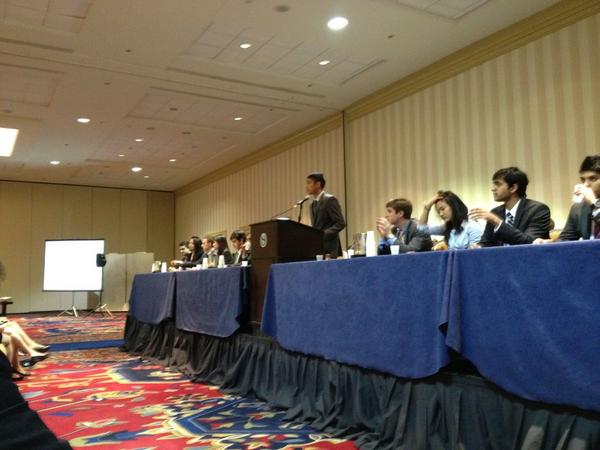 Located in Lower Manhattan, opposite City Hall and next to the Brooklyn Bridge, Pace University’s campus community in New York City was severely affected by the aftermath of Superstorm Sandy. Our main campus was without power for a week and our students, faculty and staff living in some of the more devastated areas, such as New Jersey, Staten Island, Red Hook, the Rockaways, Coney Island and Long Island have been struggling with the storm’s disastrous humanitarian impact. (See this feature on Pace in the Chronicle of Higher Education this week).

It was thus a difficult decision whether we would take our Model UN program to the University of Pennsylvania conference (UPMUNC) this Thursday, just a day after classes restarted and after an evening blizzard dropped several inches of snow onto the city. Several of our students were unable to come, wrestling with the aftermath of the hurricane. But for many of our students, going to a Model UN conference offered the opportunity to get away from the situation and even to stay in a place with power, heat and hot water for a few days. So Thursday morning everyone headed uptown, dragging suitcases through the slush to catch a bus to Philly.

As I write this, our students are busy at work in their various committees, representing Monaco, Liechtenstein and the Federated States of Micronesia in simulations of a variety of UN General Assembly, ECOSOC and specialized international institutions. They are discussing a range of crucial global challenges ranging from mitigating maritime piracy, poverty reduction, protecting the human rights of juvenile offenders and managing industrial development.

“We bring you the most expansive committee and social experience in one of the world’s most vibrant cities while maintaining the highest quality standards,” Varun Arte, Secretary-General, and Karthik Kumar, Director General, of the conference, told delegates. “This year, we anticipate having more than 1,200 delegates from over 70 of the most prestigious universities in the world, coming as far as Venezuela, Thailand and Ghana.”
While we didn’t have to come far to attend UPMUNC, I am proud that despite cancelled classes and power outages our students are well-prepared and holding their own in such a challenging setting.

Located only two express subway stops from the iconic United Nations complex on the East River, Pace University’s New York City Model UN program has a 60-year history of excellence in regional, national and international conferences. Model UN at Pace is uniquely integrated into the Political Science curriculum within the Dyson College of Arts and Sciences and aims to encourage students to develop wisdom, knowledge and skills for global citizenship.

UPDATE 11/11/12: Two Pace students received verbal commendations for their work at UPMUNC:  for representing Monaco in a simulation of a debate about the role of the private sector in the UN Industrial Development Organization (UNIDO) and Michael Zona, a head delegate, for representing Monaco in simulated discussions of piracy in the International Maritime Organization. Congratulations to both of them!